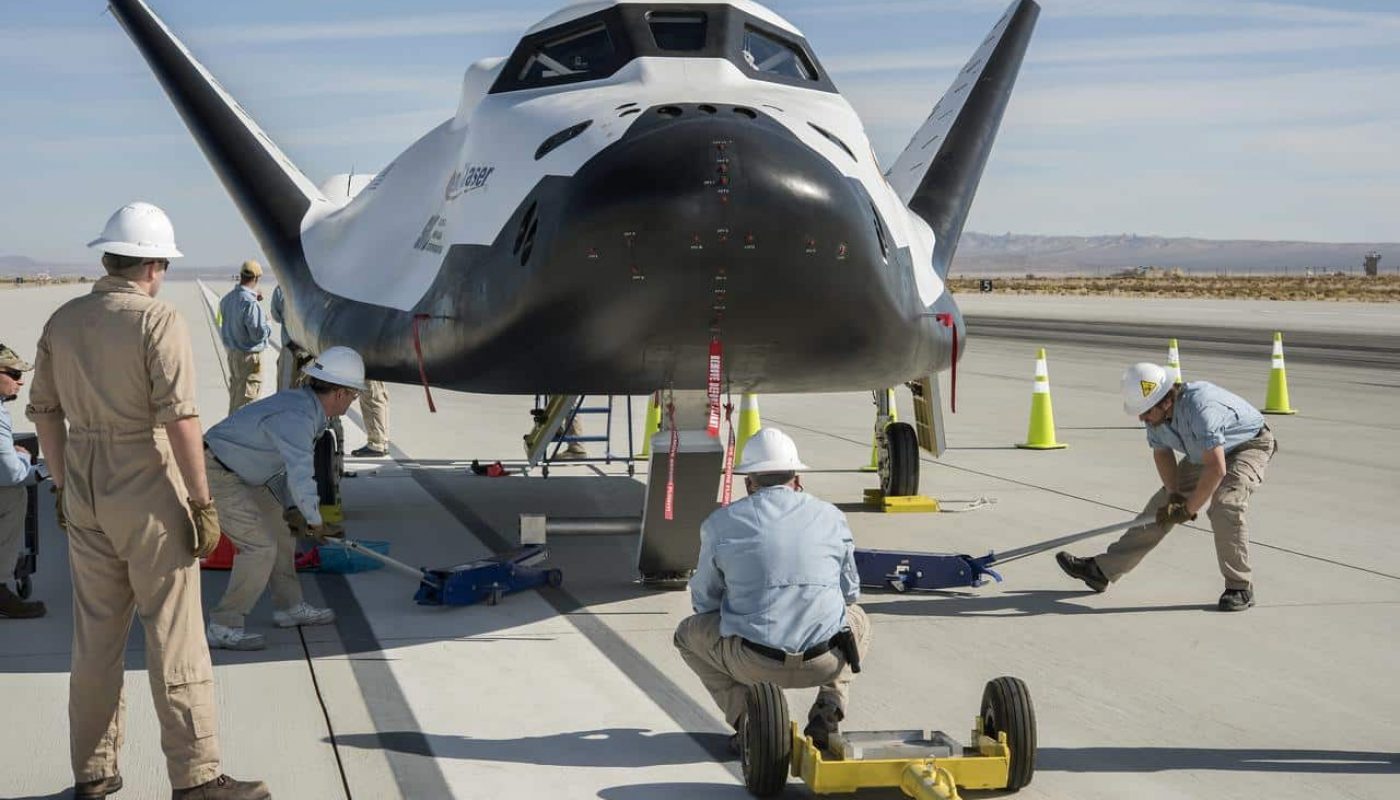 As the Dream Chaser® spaceplane progresses towards launch, elevating the Orbital AgeTM, and revolutionizing how both cargo, and eventually humanity, reaches low-Earth orbit (LEO), it’s time to reflect on how we got here. The Dream Chaser wouldn’t be on the verge of changing our relationship with space without an unbelievable amount of hard work and dedication. The spaceplane’s pivotal 2017 test flight, transformed the Dream Chaser from an amazing design into an amazing flying machine.

Of course, great leaps in tech don’t always happen smoothly. The Dream Chaser faced tremendous challenges in its development. These were overcome via the combined skill, grit, and tenacity of the entire Sierra Space team.

Yet such setbacks didn’t dampen Sierra Space’s enthusiasm. Neither did it give us reason to give up or even slow down our work to make space available to all. Instead, we redoubled our efforts to achieve a successful flight test, scheduled for November 2017 at NASA’s Armstrong Flight Research Center, located within Edwards Air Force Base. This moment would prove to be a turning point in bringing the Dream Chaser to life.

We recently interviewed two leaders of the 2017 test flight team to learn more about this dramatic day. Corbett Hoenninger, recently named the Senior Vice President of Engineering for Sierra Space, was a critical member of the engineering division leading up the charge. Likewise, another instrumental part of the equation was Jeff Davis, Vice President of Flight Operations who ran mission control for the test flight. Together, these experts described the technical challenges, tension, and ultimately, exhilaration of the Dream Chaser’s landmark test flight.

As Davis explains, this was Sierra Space’s big chance to demonstrate Dream Chaser performing a runway landing as it will do when returning critical cargo and science experiments to the Kennedy Space Center. “NASA and other stakeholders don’t want their programs to be just exercises on paper that only perform well in computer simulations. They like to see hardware being tested, so this was our opportunity to demonstrate just how well the Dream Chaser handled atmospheric flight.”

But the first challenge was how exactly to show off the spaceplane’s ability to return to Earth with a smooth 1.5G runway landing. (The Dream Chaser can nimbly maneuver in space thanks to thrusters, but it doesn’t take off from a runway like a normal plane.) Instead, it launches atop a variety of the most advanced rockets available, such as the Vulcan Centaur. Rocketing into space for a test flight wasn’t feasible, so the team had to develop an alternate way to mimic Dream Chaser’s future reentry and landing flight plan.

The initial idea was to drop  the Dream Chaser from a high-altitude carrier aircraft, reminiscent of how Chuck Yeager’s Bell X-1, the plane that broke the sound barrier, dropped from a bomber as shown in the iconic film The Right Stuff. But when launch plans with a partner collapsed, it was up to the team to devise a new solution. Their answer? The ingenious use of a cargo helicopter. The helicopter would fly a racetrack pattern at 10,000 feet to enter a specified “box” of airspace designated as the drop zone and travel at a particular speed with the Dream Chaser hanging below at a specified angle. The Dream Chaser would then be released, entering a steep dive to gain airspeed before entering a normal flight profile, touching down with a smooth runway landing.

The new plan in place, the team got to work preparing for the test flight. But something this important wasn’t just a matter of transporting the spaceplane to Edwards Air Force Base. As Hoenninger explains, “We had a team of 60 dedicated experts living and working away from home for nine months leading up to the test. The dedication of the Sierra Space team was amazing—we’re talking 12-hour days six days a week away from their loved ones.”

The team spent countless hours practicing every step of the intricate test flight and had to find and fix the normal bugs and quirks of a test airframe. For example: adding protection to electronic interference, which became necessary after a Dream Chaser test flight attempt had to be scrubbed due to the interference causing command errors in Dream Chaser’s software.

All this hard work culminated on a chilly day in November 2017 when the test flight finally occurred. As the team began their preflight work, aware of the great expectations around the flight, Davis reiterated: “Hey, this is like the other times we’ve been in this room. Stay vigilant and do your jobs like only you can—and let’s give her a good flight.”

Buoyed by this recognition, everyone settled into action as a well-oiled machine. All pre-flight checks came out perfectly. Next, the helicopter took off with its precious cargo—along with the hopes and dreams of every Sierra Space team member intent on opening space for humankind’s benefit. On the helicopter’s first pass, conditions were unsafe for launch and the team scrubbed the drop. With only three orbits scheduled, some observers wondered if there would even be a test flight that day.

Those fears were unfounded.

As the helicopter made its second try on the launch zone, all systems were green, and the Dream Chaser began its test flight. The spaceplane entered a steep 70-degree dive, quickly gaining airspeed to intercept the flight path for its normal Earth return. The Dream Chaser then flawlessly performed a series of aerodynamic ‘test inputs’ designed to produce real-world data to validate control system parameters. These maneuvers perfectly aligned with our projected models, assuring us we were, in fact, on the right path.

At last, the Dream Chaser deployed its landing gear, flared and touched down beautifully on the Edwards runway.

In truth, the Dream Chaser had “stuck the landing”, as Hoenninger puts it. Immediately, the team knew they had a major success on their hands. Davis reports mission control was more than elated. “We went around congratulating each other. There was laughter and a few tears too.”

A tremendous sense of relief was felt by all. The critical test flight had gone even better than we had hoped. Meanwhile, Hoenninger had his own unique reaction due to his vast experience with the Dream Chaser. “All of this weight and stress we’d been holding was suddenly gone. We’d done it, but I only felt like relaxing for a little while after the test. I was so energized by the test flight I was right back to thinking about the next major milestone we’d hit.”

Undoubtedly, 2017’s winning test flight of the Dream Chaser set Sierra Space on the path to achieve our goal of opening low-Earth orbit. We couldn’t be prouder of what the team accomplished then and view this experience as a portent of so many more good things to come in our fledgling Orbital Age, an exciting era in which we democratize space for the benefit of all.